Information below from 1911 Census 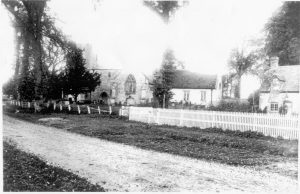 Kelly’s Post Office Directory – 1911
OAKLEY is a small village and parish near the borders of Oxfordshire, 7 miles north-west of Thame and 3½ miles south-west from Brill and Ludgershall station, on the direct Birmingham line of the Great Western railway, 16 west from Aylesbury and 10 west-by-north from Oxford, in the Northern division of the country, hundred and petty-sessional division of Ashendon, union and county court district of Thame, rural deanery of Waddesdon, archdeaconry of Buckingham and diocese of Oxford. The church of St Mary is a small but ancient building of stone in Transitional, Decorated and Perpendicular styles, consisting chancel, nave with clerestory, and arcade of five bays separating it from the north aisle, south transept and a low western tower containing 4 bells and having a stair turret at the south east angle rising above the tower and capped with a spirelet and finial : in the south transept is a stained window of three lights, and the outside wall is a cinquefoiled arch over a sepulchral recess, in the north aisle are two tombs of the 13th century, one of which bears a cross finely carved on the upper slab, and on the other are traces of a brass; some wall painting formerly whitewashed, still exists : the north wall of the chancel retains a Decorated piscina, and the south transept a hagioscope and an ancient stone locker: in 1885 the chancel was entirely rebuilt at the sole expense of Charles Aubrey Aubrey esq. :in 1886 the interior was entirely re-floored and re-seated, and a new heating apparatus affixed, at a cost of £200, and in 1889 the Manor aisle was restored and a new pulpit, lectern and a font cover was provided. The total cost of the several works amounted to upwards of £1,065, of which £860 was contributed by C.A. Aubrey esq.: the church was further restored in 1909 by the late Sir Henry Aubrey-Fletcher bart. to whom there is a brass tablet erected by the parishioners: there are 200 sittings, most of which are free. The register dates from the year 1726. The living is a vicarage, net yearly value £240, including residence and 100 acres of glebe (the whole of which is let in allotments), in the gift of the Sir Lancelot Aubrey-Fletcher bart. and held since 1896 by the Rev. James Skinner B.A. of Trinity College, Dublin. Here is a Congregational chapel, erected in 1845, affording 150 sittings. The Poor Folk’s pasture of 115 acres produces £102 yearly, which is distributed among the 34 poor persons of this parish, each of whom receives £3 yearly ;there is also another allotment of 4 acres, called the “Poor’s Piece,” producing an annual rent of £8, which is received by trustees and expended in the purchase of greatcoats and calico; Hart’s charity produces an annual sum of £2 14s which is retained by the trustees until it amounts to a sufficient sum for apprenticing the son of one of the poor labourers in the parish, the premium given varying from £20 to £25; Clark’s charity of £1 annually is applied to the repair of the parish church. Richard Turpin and Ralph Beal conveyed to two trustees and their heirs a parcel of land, known as “Church Lands”, consisting of rather more than 6 acres of pasture land and producing a rental of £10 yearly, which is also expended in church repairs. Hon Sir Lancelot Aubrey-Fletcher bart. of Dorton is lord of the manor. The soil is a deep tenacious clay, with various loams; subsoil, gravel and clay. The area is 2,806 acres ; rateable value, £3,075; the population in 1901 was 406 in the civil and 398 in the ecclesiastical parish.
By Local Government Board Order 19,618, dated March 25, 1886, Shabbington Wood Cottage was transferred from Shabbington to Oakley.
Parish Clerk, John Brooks.
Post Office – Mrs Elizabeth Eborn, sub-postmistress. Letters received through Thame via Brill at 7:30 a.m. & 1:30 p.m. Box cleared at 9:10 a.m. & 5 p.m. ; Sundays, 10:30 a.m. Brill, 2 miles distant, is the nearest money order and telegraph office.
Elementary school, enlarged in 1884, and further enlarged in 1901, for 140 children ; number on roll, 110 ; average attendance, 102 ; Walter Charles Allward, master.
Carrier to Thame, —- John Hawes, Tues.
—- Charles Cheese, Tues. & Fri.
Carrier to Oxford, —- John Hawes, Wed & Sat
—- Charles Cheese, Wed & Sat