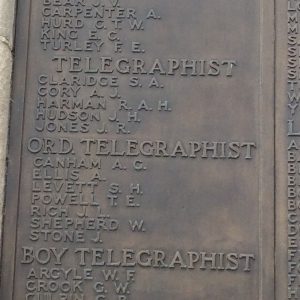 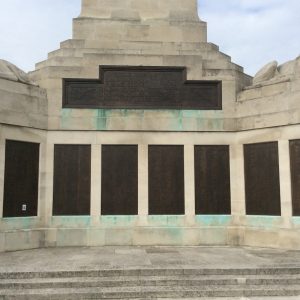 Chatham Naval memorial
After the First World War, an appropriate way had to be found of commemorating those members of the Royal Navy who had no known grave, the majority of deaths having occurred at sea where no permanent memorial could be provided.

An Admiralty committee recommended that the three manning ports in Great Britain – Chatham, Plymouth and Portsmouth – should each have an identical memorial of unmistakable naval form, an obelisk, which would serve as a leading mark for shipping. The memorials were designed by Sir Robert Lorimer, who had already carried out a considerable amount of work for the Commission, with sculpture by Henry Poole. The Chatham Naval Memorial was unveiled by the Prince of Wales (the future King Edward VIII) on 26 April 1924.

Chatham Naval Memorial commemorates 8,517 sailors of the First World War and 10,098 of the Second World War.

E16 was responsible for sinking the destroyer V188 in July 1915. E16 was the first E-class to sink a U-boat (U6) sunk 4 miles (6.4 km) south-west of Karmøy island off Stavanger, Norway on 15 September 1915. E16 sailed from Harwich, England on 18th August 1916 for the last time, she was sunk by a mine in Heligoland Bight on 22 August 1916. There were no survivors.
22 August 1916 – Lost in North Sea (unknown cause)
E16 was last sighted thirty-five miles east of Yarmouth by HMS E38. E38 later observed a group of warships moving north, in the vicinity of Terschelling, Splashes were seen near to one of the warships which may have been depth charges exploding. Reports of enemy vessels attacking a periscope on the 22nd August may have been against E16.

The wreck of Submarine E16 was found in early 2001 by a German diver, Rolf Schuett, in the Heligoland Bight north of the Dutch Island of Terschelling. It was found to have a large, gaping hole in the hull, which indicates a mine or a torpedo explosion.
It was thought E16 was sunk after entering a minefield from the swept channel – the reported damage may be the confirmation of this theory