Estaires Communal Cemetery and Extension
Estaires was a centre for medical units from early in the war. In April 1918 it fell into German hands and it was recaptured later. The Communal Cemetery was used for burials until June 1917 and the Extension thereafter. Altogether they contain the graves of 661 British, 6 Canadian, 139 Australian, 56 New Zealand, 9 Indian, 2 French and 6 German soldiers.
There are also the graves of 9 British servicemen of the Second World War. 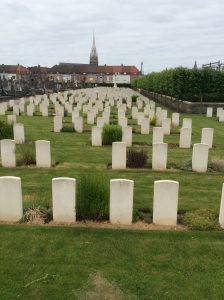 6th Battalion Oxford and Bucks Light Infantry
The 6th (Service) Battalion (6th OBLI) was formed at Oxford in September 1914. It became part of the Kitchener’s Second New Army (K2) and placed in 60th Brigade, together with 6th Battalion, King’s Shropshire Light Infantry (6th KSLI); 12th Battalion, King’s Royal Rifle Corps (12th KRRC) and 12th Battalion, Rifle Brigade (12th RB), in the 20th (Light) Division).
After its formation in September 1914, the 6th Battalion was at Aldershot with the 60th Brigade. It moved to Larkhill Camp, Salisbury Plain in March 1915 to complete it recruitment, fitting-out and training. The Battalion sailed to Boulogne, France on 22 July 1915 and moved by stages up to sur-La-Lys, south-west of Armentieres
The men were sent to the trenches for instruction in trench warfare . The men were paired with soldiers of the 2nd Devonshire’s while they learnt to work as platoons in the trench lines. The 6th Ox & Bucks went into the trenches for the first time on 10 August 1915. For the next twelve months, the Battalion carried out heavy and often dangerous duties in holding various parts of the front line, at Estaires, Fleurbaix and Poperinghe, without the satisfaction of having taken part in any major action.

4th -5th September 1915 – LE QUESNOY
Parties of men, 3 or 4 platoons at the time employed both by day and night on fatigue work in the trenches or at the Brigade (?) Store.
On 5th 29th Reinforcement of 850R arrived.
6th September 1915 – To trenches at GIVENCHY
In the afternoon relieved the 1/Queens in the same section at GIVENCHY, now re-numbered B3. A little bombing, but on whole quiet night.
7th September 1915 – In trenches at GIVENCHY
Early in the morning the enemy blew up a mine close to one sap in Southern group of craters but very little harm was done. Quiet night but some premature bomb explosions took place in our trenches, injuring 2 officers amongst others
8th September 1915 – To billets at LE QUESNOY
At 5 a.m. our miners blew in a German mine very successfully the craters thus formed (?) improving our positions at the sap-heads. Quiet day
Casualties Killed Capt A.W.N. PONSONBY (shot be sniper in early morning) and 2 men
Wounded Lieut C.A. BARREN, 2nd Lieut A.E.S. RIDDLE and 9 men (1 on 7th)
In afternoon relieved by the 1/Queens and returned to same billets at LE QUESNOY