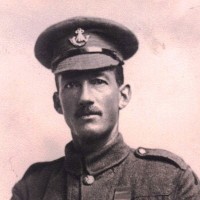 ooks was born in Oakley, Buckinghamshire, on 11 April 1883 and baptised in Oakley Church on 20 January 1884. He was one of twelve children of Thomas (born in Oakley in 1855) and Selina Brooks (born in Halesowen, Worcestershire in 1857).

He was 34 years old, and a Company Sergeant Major in the 2/4th Battalion, Oxfordshire and Buckinghamshire Light Infantry, British Army during the First World War when the following deed took place for which he was awarded the VC.

On 28 April 1917 at Fayet, near Saint-Quentin, France, Company Sergeant-Major Brooks, while taking part in a raid on the enemy’s trenches, saw that the front wave was being checked by an enemy machine gun. On his own initiative he rushed forward from the second wave, killed one of the gunners with his revolver and bayoneted another. The remainder of the gun crew then made off, leaving the gun, whereupon the company sergeant-major turned it on the retreating enemy, after which he carried it back to Allied lines. His courageous action undoubtedly prevented many casualties and greatly added to the success of the operation.

On the 28th April 2017 a stone will be laid in Oakley Church grounds in memory of this event.

After the ceremony, all attendees are invited to go to the World War One exhibition in Oakley Village Hall.

The ceremony will start at 10:10 and will last approximately 65 minutes.

‘When You Go Home, Tell Them Of Us And Say,
For Your Tomorrow, We Gave Our Today.’